Liberty to Get on the Wrong Bus

The Budapest full moon has a way of capitalizing the ‘strange’ in stranger. At 9pm, Tim and I had just finished eating dinner, near the river on the Pest side, when we decided to hike Gellért Hill to see the Liberty Statue, which hung from the sky on the opposite (Buda) side of the river, balancing the city by the sheer mass of it’s meaning.
The hike was farther than expected. The hill was steeper than it looked. There came a time when we wondered whether that whole “journey/destination” proverb was just a clever marketing scheme created by the Hungarian Department of Tourism. Turned out to be just another unproven, American conspiracy. With every heavy breath, the city lifted us higher and higher––showing its time-built elegance, sharing its feeling of hard-earned liberation.
We walked around the top of the hill soaking up the history, along with dozens of other people all wearing similar sponge-like expressions. The only difference was they weren’t sweating, because they took a tour bus. They were the “smarter not harder” type. And we were curious.
We thought, “We should get on a random tour bus?” Or at least, that’s what I thought.
“I’ll follow you,” Tim said. “That way I can blame you if anything goes wrong.”
I blame the endorphins from the hike, and the full moon (had it been a few days later, I could’ve blamed the pálinka). Looking back, my mistake was picking the bus where everybody was over sixty-years-old. Tim blended in like lint on a lamb, but I was not so unnoticeable. Walking down the aisle, I tried not to make eye contact, though it was hard to ignore the way every everyone tilted their heads back to squint at me through their bifocals. It was as if the bus had suddenly leaped into Mach 1, and everything besides the wrinkles were thrown into the seat back.
The tour guide said something to me in Hungarian. The precision of her hand gestures made this the first Hungarian sentence I have ever understood. Not able to think of anything clever to say, I played dumb. She repeated her hand gestures, and translated them into a few different languages, all of which were clear as a curse.
I said, “I’m sorry, I don’t understand.”
“This is not your bus!” she repeated for the eight time.
Still acting dumb, I looked around the bus, and having a lot of experience in this type of acting, Tim followed suit. “Oh, wow! Ha. You are right. This isn’t our bus.”
“This is a German bus,” she said, confirming that I was not as language savvy as I thought I was.
“Thank you so much for letting us know,” trying to laugh it off, “We would’ve ended up somewhere completely different than expected. Ha-Ha!” We were the only ones laughing.
You could see the gray hairs being peeled from the headrests, as we turned around to walked back down the aisle. We were almost out the door when we realized that we had a lifeline: a book. Tim had it wrapped in his coat, which was tied around his waist in typical 1970s fashion––a style only the elder can pull off, of which I’m immaturely jealous.
I grabbed the book, spun around and held it out as a peace offering. “We have a gift for you. For saving us from getting on the wrong bus.”
This gesture won back the audience. No more squints. No more silence. They “awww-ed” us. We went from being the arrogant, dumb Americans to the kind, innocent gentlemen from America. Success! And the tour guide accepted our gift with both hands, which meant that as we walked away, she was unable to make any further gestures.
On the way home, we kept thinking, what would have happened if we had stayed on the bus? What could we have done different to make it less awkward? These questions may not have an answer, but they are fun to think about. They may appear superficial at first glance, but after a little physical thinking and a mental hiking, a new world of possibilities starts to open up, just as it did for us, in the space and time between Buda and Pest.
_____
-GG 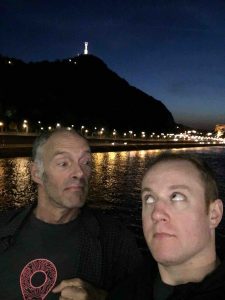 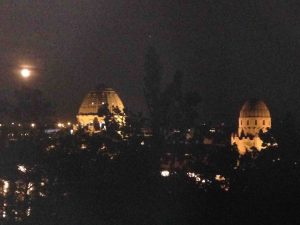 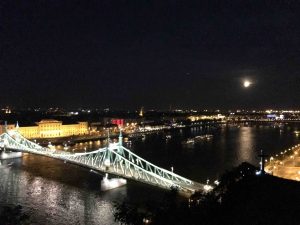 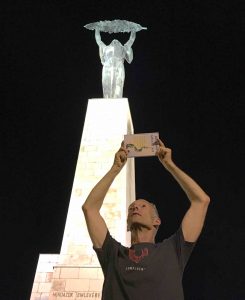