About the gifting of this book and the drawing “Perched on a Moment”, Garret says:

Traveling from Bahrain to Dubai, on my way to the airport, the driver says, “Where are you from, sir?” A seemingly simple question, yet it brings with it worlds of context. When I’m traveling through Europe, people don’t ask that question. They ask,are you from the US? They assume, or they can tell by my accent––hopefully not by my actions. In America, people might ask, where are you from, but they usually mean, from what city or state. I could tell that Babar, the driver, had no expectations or assumptions; his face gleamed pure, open-ended curiosity, as if he’d not intended an answer as much as a conversation. And that’s what happened: a conversation that rolled smoothly, like the wheels of the car, nonstop until we reached the airport.

Babar had moved to Bahrain from Pakistan 15 years ago. He told me about his childhood, growing up, moving, and how he believes education can help end war.

“I grew up in a poor city. My family was poor. I had no education,” he said. “But I wanted to learn.”

When he first arrived in Bahrain, he told me his first job was painting office buildings. For twelve hours a day, seven days a week, he painted. “I knew I was capable of more, so I started to educate myself.” He learned to speak English so that he could work in service jobs, and now he’s learning Mandarin and teaching himself how to read both languages.

You could hear the passion in his voice as he talked about how he makes sure to set aside money each month for his personal education and that of his daughter. He has two children: a son who is one-year-old, and a daughter who is seven. “Family is first. Education is second. I send my daughter to a really good private school. Because I don’t want her to have the same challenges I had. Prejudice, crime… Because education teaches peace. We learn that we are all the same. No one is better or worse.”

In the past 15 years, Babar said that he’s been in three life-threatening situations where, as an innocent bystander, he had happened to be in the middle of either a crime scene or terror attack. He moved to a better neighborhood, where he now feels safe, and his ultimate goal is to achieve Bahraini citizenship. “I just applied,” he said, “But 15 years is not enough. They told me to check back in five more.”

When we pulled up to the airport, I thanked him for sharing his life and conversation. I picked out a drawing, Perched On a Moment (one of Tim’s Chinese calligraphy pieces) and said, “I want to gift you a gift, Babar. A symbol for your love of education.” I handed him the drawing. “And here’s something to read as you continue to master the language.” I gave him a book (#232).

His hand jumped out to greet mine. “Thank you very much.” Then he held the book and traced his fingers along the title, “Random Gifts of Art! I am grateful, sir.” 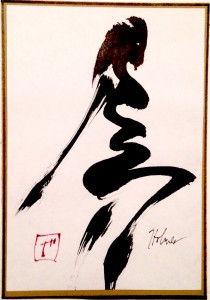