At 1 a.m., there was a knock on my hotel room door. I didn’t wake up, but my roommate told me in the morning. “Ola came looking for you last night. Said you’d left her a message at the front desk. You were sleeping, so she said, if you still wanted, you could stop by her room before you left.” He handed me a torn piece of hotel stationary with her room number. “The airport taxi will be here in 45 minutes.”
__________

I had met Ola, two days earlier, in the lobby. I had gone downstairs to inform the front desk clerk about two urgent problems with my room. 1: The man who had stayed in the room before me must have forgotten his leg hair, because it was all over the bed; and whether they preferred to package all the little hairs in a large Ziploc or garbage bag, didn’t matter to me, I just wanted new sheets. 2: The internet wasn’t working.

At $150 per night, I wasn’t going to settle for only one solution. In my mind, both problems were equally hairy and needed to be groomed immediately. The hotel’s website promised, “Clean, comfortable rooms,” and, “Free internet!” A complete lie, unless they meant the hairs would provide extra cushion while I rolled around in a frolic of follicles until I built up enough static electricity to create a hotspot. But as gross as that would have been to try, I didn’t.

“I’m very sorry, sir,” the clerk said. “We’ll send someone to fix these problems.” To maintain their waning reputation, after three attempts, they replaced the sheets. I’ll skip the furry details of how the new, replacement sheets were covered in just as many leg hairs, and how I caught the worker secretly trying to pluck the sheets without me noticing. I’ll move on because I need to get to the part about the internet; just know that the final set of sheets came from a sealed dry cleaner’s bag. I should also mention that the reason I think those dark, greasy curlicues were leg hairs was because they were most abundant in the lower half of the sheet––and if I allowed myself to believe they came from more centralized, sweatier anatomical locations, I wouldn’t be able to write this without vomiting. So, I lie to myself, which I don’t often do when it comes to pubic affairs—I mean, public hairs—I mean, since the hotel cares neither about the truth, nor privates matter. Moving on!

“They’re not sorry. They’ve been saying the same thing for months,” said the woman seated in the lobby. “I stay here all the time, and the internet never works. If you sit near the window, sometimes you can pick up a WiFi signal.”

I exhaled the remainder of my anger and claimed the empty seat next to her. The lobby was crowded with people all doing the same thing: checking emails and sharing in the misery of being stuck at a sleazy hotel.

“My name is Ola,” she said. We exchanged stories about how we ended up in Dubai (did I forget to mention this was in Dubai?). Ola works for the Arab branch of National Geographic, based in Abu Dhabi. Traveling frequently for work, she learned that the reason the internet wasn’t working is because the hotel didn’t pay their bill, which, in a weird way, I found comforting.

Her honesty cleansed my emotions. “Hotels are very expensive here,” she said. “For $150 this is as good as you will find.” I didn’t mention the bushland I had found in my bedroom. I had forgotten. By the time we finished talking, the hotel’s squalid defects no longer mattered. Ola made them disappear. If I had had a piece of art, I would have given it to her. I didn’t have one with me, but I figured I would see her again. And I did.

The next evening, as I walked through the front door, I saw her sitting in the same chair next to the window. I bolted up the stairs, ran into my room, and grabbed a drawing. But, when I returned to the lobby she was gone. “The woman who was sitting over there, did she leave?” I asked the front desk.

“Yes! Did she check-out?” Normally, when a hotel worker remembers your name, it’s courteous. This was creepy.

“She is staying here for two more days, sir. I’m not sure where she went, but I can give you her room number if you want to check her room.” Creepiness confirmed!

“Please, no! I don’t think you should be giving out people’s room numbers. Just tell her I have a gift for her, if you see her.”

With only 45 minutes before catching the taxi to the airport, I needed to move quickly. When Ola returned to the hotel last night, what did the front desk clerk tell her? What could he have said to make her knock on my door in the middle of the night? Obviously, he passed on my message, but he must have also gave her my room number, and told her if she didn’t find me soon, we might never see each other again because I would be leaving in the morning.

For four days (other than the time I spent talking with Ola in the lobby), I felt like I was staying in the worst hotel in the world. I felt lied to. I felt unimportant. But in the last hour, I felt like they actually cared. I thought, “What if the leg hairs were all part of their plan. They wanted to freak me out just so they could get to know me. They just wanted to be my friend.” Then I remembered they weren’t leg hairs, and I itched my way back to reality.

But I do thank the hotel’s incompetence for the conversation I had with Ola. Lack of connectivity brought us together.

Room 612. I folded the paper into my pocket, and knocked on the door. A sleepy voice on the other side said, “Who is it?”

I heard footsteps moving toward me. “Hi,” she said, opening the door. “Sorry for stopping by so late last night. They told me…” she saw the drawing and paused.

“I’m sorry for waking you. I meant to give you this the other night. The best part of staying here was talking with you.” I gave her the drawing. “And here’s the book I mentioned, too. Thank you, Ola, very much.”

She brushed the hair from her eyes and said, “Thank you very, very much.”

We said a quick goodbye, and as I rushed through the lobby, I saw an angry man waving his cell phone in the air and yelling at the front desk clerk. Interrupting the man, I said to the clerk, “Thank you. This’s been a wonderful stay.” 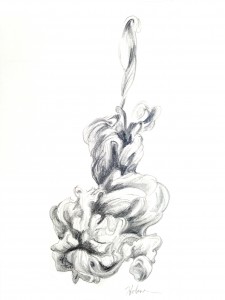