On his way to Europe for our 2017 Random Gifts of Art tour, Garret found friends on the plane! And not just any friends; Kevin and Ilgaz were featured in one of the “Tales of Woah” TV shows we did last year.  When the plane landed in Amsterdam, Kevin handed Garret this painting he’d done. He said, “Here’s a gift to kick off your 2017 Tour.”  Cool! Garret gave him book #1,121  Kevin asked us to await the story of whom he gives the book to. They’re on their way to Istanbul. We can’t wait to hear! 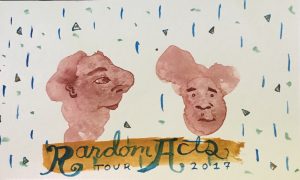 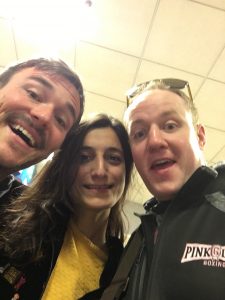 Kevin and Ilgaz greet Garret before their flight

My name is Zac, I had book #474, I received it in between two countries (Hungary and Czech) but not exactly sure where. I read it in Iceland in two sittings on June 23, 2016. After reading the book I instantly began to feel the pressure you described in the book about giving away the [book] for the first time. I was going through situations in my head of who might be the perfect recipient in a country where I know no one, and to be honest, was unsure if even spoke English.  Luckily for me I didn’t have to stew over it for too long. We then we met up with a friend who was a glacier guide at the time, and stayed at his team headquarters. We organised with his team that on their next days off they would join us to travel to the east side of Iceland. It was while camping on these days I met a guy called Ryan Christopher Connolly. This guy was such a nice person with a big heart, and spoke of things in the world differently to anyone I had ever met. He instantly changed my perception on a few things that I at the time viewed with a slight negative light. This guy has a talent, he has the ability to provide a positive view on a situation, without and argument/debate, just a simple conversation, and not put pressure to accept or deny his view. I really enjoyed the conversations and time I spent camping with Ryan which is why on the last day I gifted him ‘the gift of giving’. He was thrilled and so intrigued that he read it that day on their looooong car ride back to the headquarters.  He reported back to me soon after, telling me that everyone was so interested in his new book at the staff headquarters that they had all read it and all loved it. He then had said he was stuck in the dilemma of feeling the pressure of finding an appropriate recipient verses letting that person find him.  Thank you for providing me with this opportunity on the train Garret, I really like what you and Tim are doing, it makes us think and it allows us to give. We already have the power to give but for some people it needs to be unlocked and I’m sure the gift of giving is helping to unlock this in some people. Regards, Zac 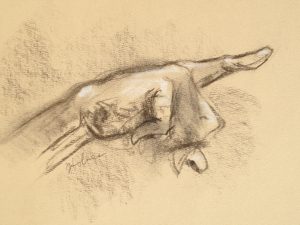 Stranger to House Keys in 60 Seconds

SERVAS is a travel club set up during the cold war to help spread peace by fostering personal connections among strangers; kind of like our own project. You interview to join the club, pay a membership fee and get access to the members anywhere you want to travel. Then on your trip you contact a member and if it’s convenient for them, you stay with them in their house and share meals and chores and get to know the joys and problems of life on a personal level. There is nothing like being in a strange place and finding a friend welcome you home!

Recently we were on our way to Copenahagen, Denmark on the train from Sweden. We tried calling a few potential hosts and found them unavailable before reaching Annamarie, who said sure, she would host us. When we arrived at her pleasant suburb home we found her digging in her garden. She welcomed us into her home and soon served us a gorgeous, authentic, healthy dinner she’d made. We had a great time sharing stories of our travels and experiences. When we left to go adventuring over the next two days she gave us the keys to her house in case she was out. By the time we left she’d offered to host us again on our way back in a few weeks, but since she would be traveling she told us to keep the keys, use the house like our own, and drop them in the mailbox when we leave!! Such trust and generosity is rare and precious these days, and leaves a lasting impact. We will return to Annamarie’s house and we will revisit this friendship no doubt for years to come!

When I moved to Vienna 8 years ago, I contated a SERVAS host family just to find some things out about the city. They became fast friends, were invaluable during my time there are are now life-long friends, whom in fact we stayed with this trip. Here are Elenore and Esther, whom we took out to dinner. Excellent human beings! What a blessing people can be!  -Tim 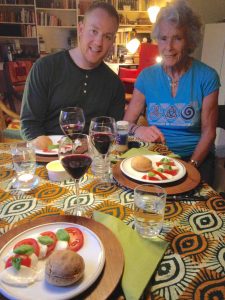 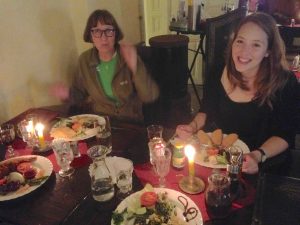 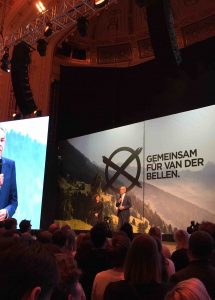 (Garret):  Book #224: When you’re traveling, it’s hard to find the right atmosphere to write. I had been on the road for ten days, when I found this quiet, quaint pub in Dubai––with an open seat right next to the bookshelf. For 8 hours straight, I sat there catching up on letters, emails, solitude; scanning the books when I needed a break. Each book had its own story. Some were signed and addressed to various people who had lived in the 50s or 60s. I wondered about their history; their expeditions across borders, seas, and decades. How many hands had held these books? How many hearts had the books held in return? Were the scars on their covers from use or misuse? For how long were they imprisoned in a box or a dark corner, dusty and deprived of the light and warmth of an eye? I wanted to know the footsteps of Frankenstein, the wanderings of Middlemarch, the odyssey of The Odyssey.

Though I may never find these answers, I felt their presence. Beneath the dust and faded ink, I could see the fingerprints of an untold story.

And who would come after me? Could I greet a future stranger with a gift from the past? I was intrigued to try. A small gesture of gratitude. From Helena to Dubai. From one weary traveler to the next. From me to you––whenever, wherever, whoever you are. 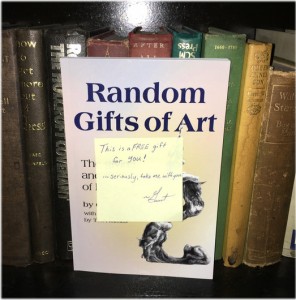 “My Inside Voice”, ink on antique music, by Tim Holmes

[Artist’s comment:] This figure was drawn with a quill pen. Not the pointy end, but the feathery one, dipped in ink. And it’s drawn not on heavy rag paper but on a fragile piece of antique music, a messy and exciting business. The result to me is a marriage of fragility and passion, a juxtaposition that speaks to me of a volatile life… It’s also the drawing I chose to be given onstage at our Random Gifts of Art LIVE! premier to our brave volunteer and friend Mary Riitano. We honestly didn’t set it up this way, but Mary is a great actress and director who is one of our local treasures.
‪#‎MyInsideVoice‬

Mary writes: “I am happy to have it… I had a special lady in the audience who has been part of my healing in life. And she was overjoyed that I stepped on stage, played with you guys and then you guys gave me that drawing representing my voice. “

A String of Art Gifters

As you were able to read from Barbara I was given the book Random Gifts of Art while celebrating my 50th birthday high up in the Alps. The party was very moving as I am an ex-pat kid and suddenly I was able to connect with people I haven’t seen for 20 – 30 year even 43 years. What was so special weren’t the gifts, as I wanted my friends to donate for the Syrian refugees, but the gifts I received by poems some stand up some well reflected, but all coming from the heart. 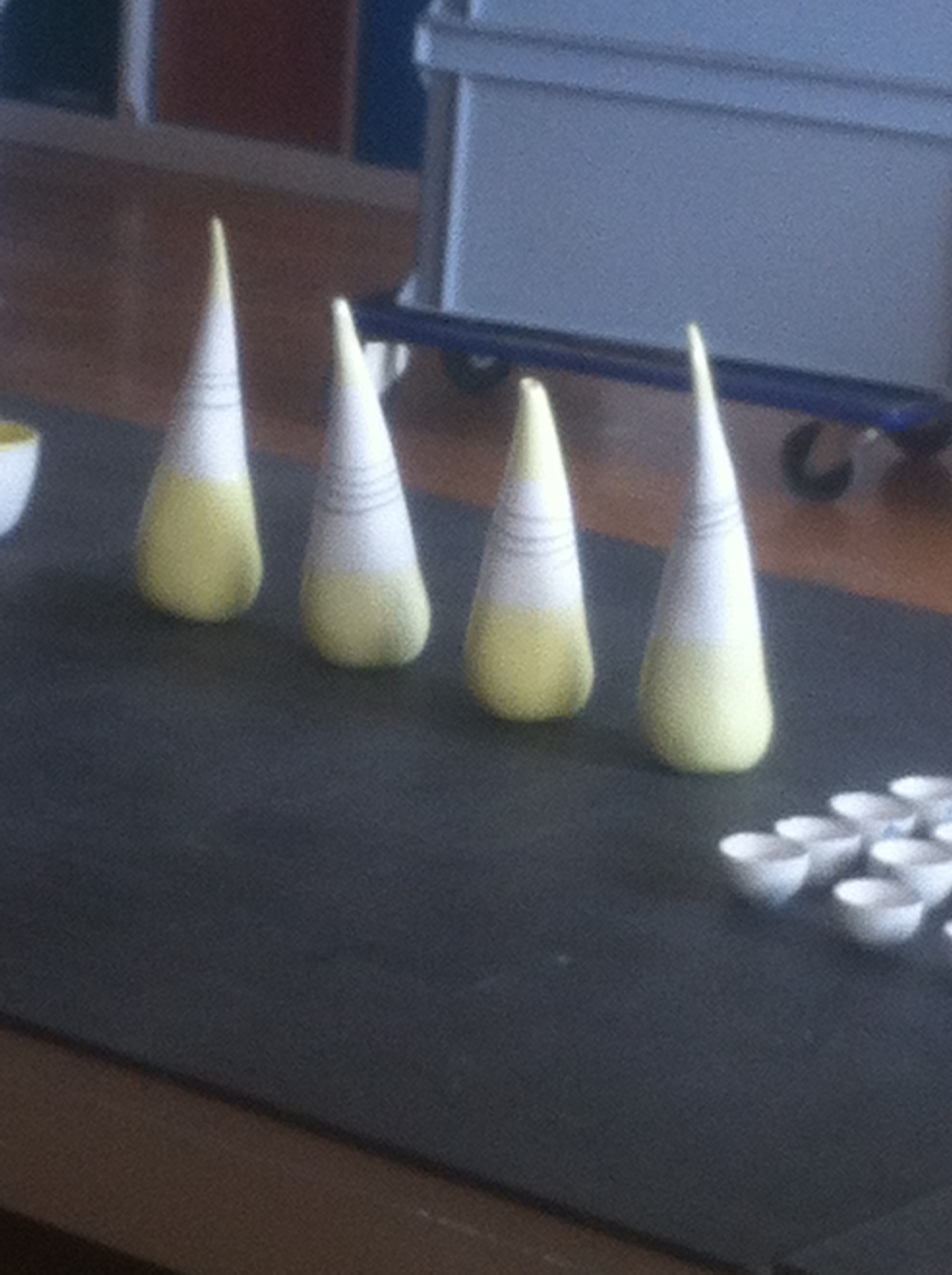 Connecting with Another Art Gifter

Our speaker friend Olivia in Berlin introduced us to Swiss artist Barbara Beckmann, who launched an art-gift project of her own (she actually made our first book purchase!) and writes to us about her gift of the RGA book:

“my present for her was the Random Gifts of Art book. Because it’s a gift to read it but not a gift to keep. Because she is a lovely woman interested in sustainability (that’s where we met) and art (that’s what we joined in the “traveling picture
exhibition”). At her party I told the audience of the Random Gifts of
Art project while giving her the book. She was very touched. And we had
an lively and interesting discussion with some of the guests about the
project later.” 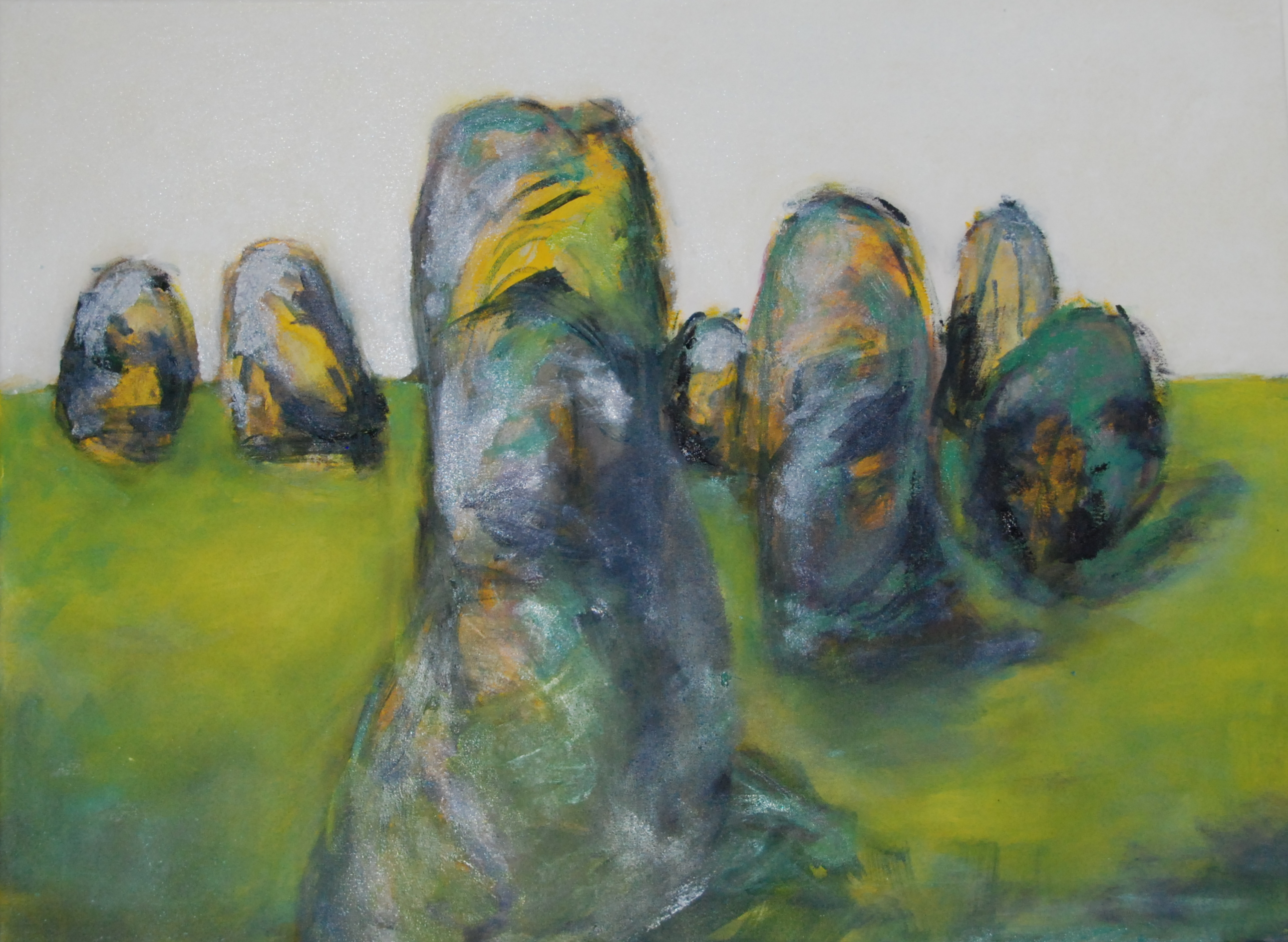 “In this country we have traded community for collection of material stuff – to the loss of many good connections to all organisms, not just other humans. Your book reminded me of the value of all connections.”

To read this whole letter from Marie Bourgois, visit Book #124.

We Get an Art-in-Return Gift

Kevin Eames says: Thank you for your kind words regarding my photo. It would be fine to use it on you site. Quite an honor actually. The picture is known as ‘A Tribute to Eric Meola’. He is an amazing photographer and lecturer and he was the inspiration behind the image.

Your project really did a lot for me. What a great vehicle for changing one’s perspective on life and living!
Keep up the great work my friend. 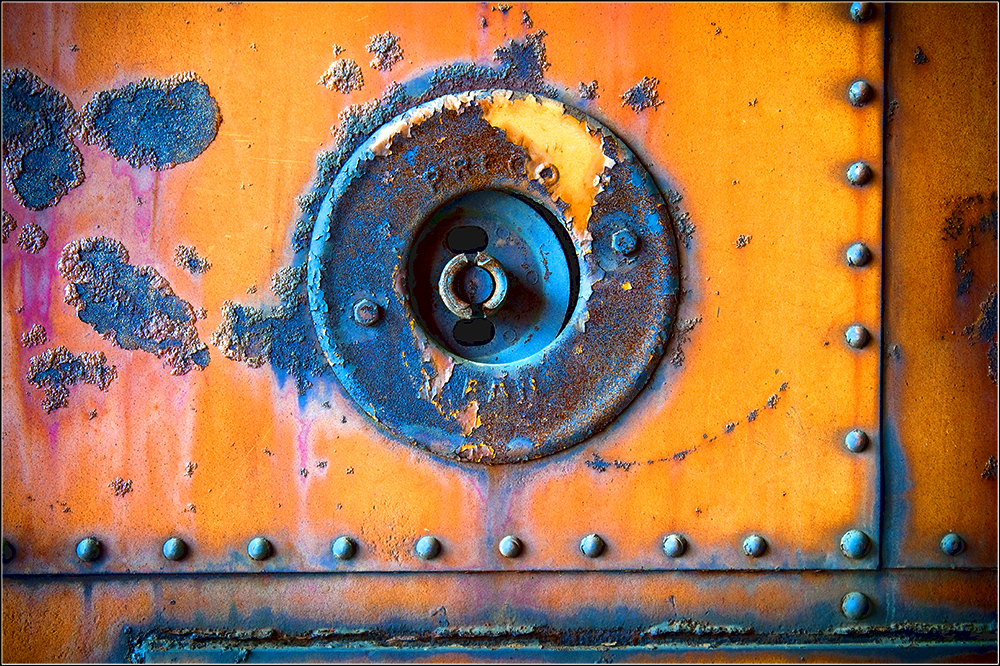 Tim gave a drawing to Olivia Schofield of Berlin, whose gift story follows:

Dashing to the airport in a small Polish town called Poznan. I discovered my flight to London was delayed by 40 minutes. I had just presented a two-hour workshop to a group of 150 software engineers on how to improve their communication skills. Either my communication skills were not quite up to it, or theirs weren’t ,  but I left with the feeling that I hadn’t hit the mark. Feeling rather sorry for myself and even more so because of the delayed flight, I decided to smoke a cigarette.

Standing outside under the darkening sky, the wind whipping up, my meager box of matches was no match for the wind. A girl standing beside me, with a beaming smile spoke to me in Polish. I smiled back and apologized for my lack of linguistic dexterity. “Would you like a lighter?” she asked me In English.

“A light you mean. Yes please.”

“No she replied, a lighter. I have two.”

I accepted and thanked her for the generosity. Turns out she had lived in Leicester, England for 7 years. “It’s my home now,” she said. “I come back here to see my family and my dentist.” She grinned, revealing her sparkling silver braces.

We swapped stories: mine about the less than successful training and my constant traveling as a speaker/trainer; and hers about love, life and living standards. We walked together to the boarding gate like two old friends, perusing the duty free shops and magazine kiosks.

“I want to tell you something,” I said, confidingly. She drew closer, curiously. “I have a couple of friends. One is an Artist, the other a fellow speaker and writer. They have this project called Random Gifts of Art.” I explained the project.

“How wonderful.” Her face shined in all directions. 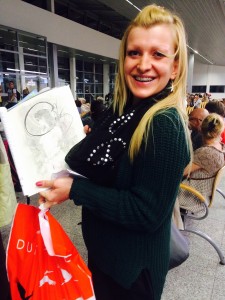 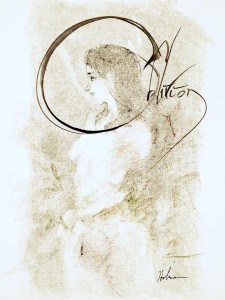